Home > books > the book on the nightstand > Girl with a Pearl Earring. A tribute to Johannes Vermeer 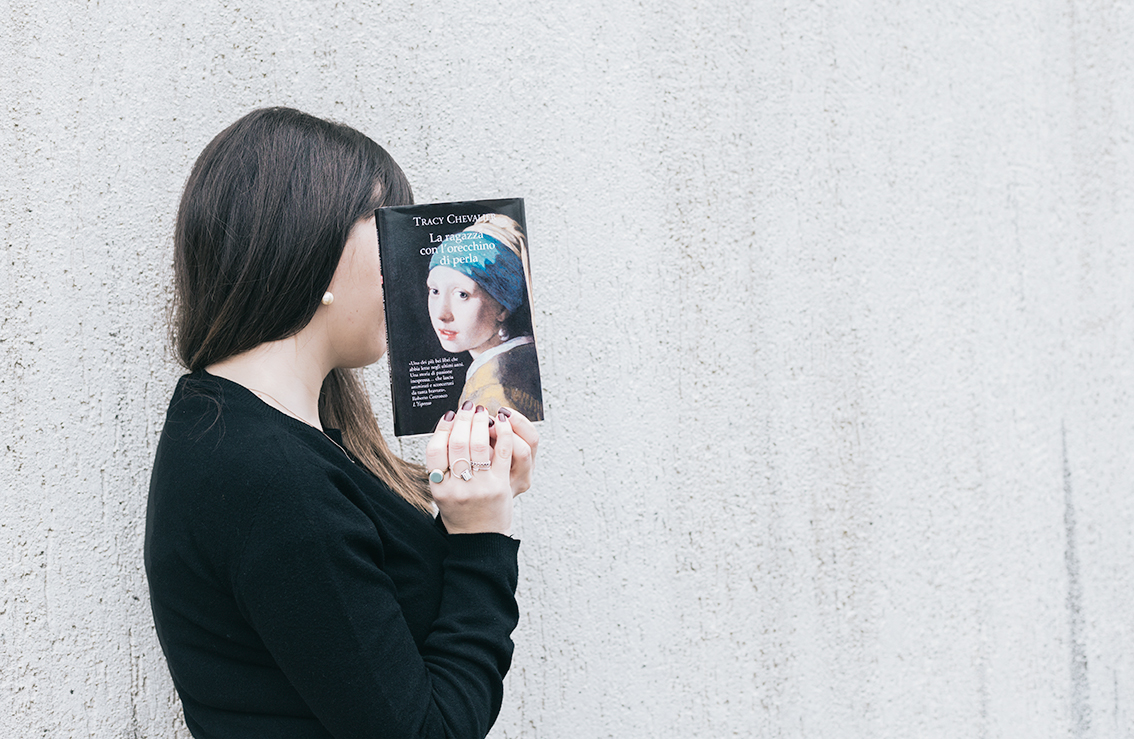 Girl with a Pearl Earring. A tribute to Johannes Vermeer

On the nightstand there is one of the most fascinating stories taken from the world of art that literature has been able to give:

Girl with a Pearl Earring by Tracy Chevalier.

I confess: I saw the film first and then read the book. I can say that Girl with a Pearl Earring is one of those fortunate cases in which cinematography has succeeded in bringing to the screen the beauty and intimacy of written words.

I got a thing for historical novels, I certainly owe this love to art. I don’t talk much about my studies, but art is an important part of me. I think you can guess from the stories I choose to tell. Sometimes they are drawn from sensational illustrated books, others from lives of extraordinary artists or simply from books where the container is as important as the content.

Today’s novel is a tribute to an artist and in particular to a century of art history, the 17th century.

In Delft it is 1664. Griet lives with her family in the Protestant quarter of the city. Her father is one of the most renowned tile decorators but he is out of favor due to an accident that deprived him of sight.

Absorbed by the affairs of the house, Griet is interrupted by the sound of some voices: the painter Johannes Vermeer and his wife Katharina from the nearby neighborhood of the papists.

I used to arrange vegetables in a circle, each in a slice like a slice of cake. There were five slices: red cabbage, onions, leeks, carrots and turnips.

It is at that moment that she learns that the next day she will be at their service as a maid. In addition to the ordinary duties, she was given a special task, that of cleaning Vermeer’s studio.

Griet enters the painter’s atelier with the care of replacing the objects in exactly the same place where she found them.

The dedication and precision of the young girl attract the attention of Vermeer, who decides to entrust her with the role of assistant. Her job is to grind the materials to make the colors; the painter teaches her about the importance of color within the painting.

You will discover that there is very little pure white in the clouds, yet people say they are white.

Between the two is immediately born an agreement made of art, of looks and afternoons spent grinding colors in silent harmony.

His eyes are worth as much as a room filled with gold, but sometimes he sees the world as he would like it to be, and not as it is. He does not understand what his idealism has on others. Think only of yourself and your work, not you. So you have to be careful … He stopped. The master’s footsteps were heard up the stairs. Be careful what, sir? I asked in a whisper. Be careful to stay yourself.

Their palpable complicity is visible to everyone in the house: in the eyes of his mother-in-law, Maria Thins, to those of his wife Katharina and the other maid Tanneke, envious of the privileged duties reserved for Griet.

His eyes hooked into mine. I couldn’t think of anything except that their gray color was identical inside an oyster shell. He seemed to be waiting for something. His face began to contract from fear, maybe I wasn’t giving him what he wanted. “Griet,” he said softly. That was all he had to say. My eyes filled with tears that I didn’t let go of. Now I understood. “Yes. Don’t move “He had started to do the portrait for me.

The portrait of the servant. The story is inspired by the work The girl with the turban by Johannes Vermeer known to most as Girl with a Pearl Earring. The same scandal is reserved for the young Griet. Her lips parted and her enigmatic gaze met with disapproval of conformists.

The languid innocence and the modest social condition of the painted girl squeaked with the morality of the time and with the preciousness of pearls, jewels destined for the aristocratic women of the upper middle class.

Yet all of us today are still attracted to that face, as much as Vermeer. It is Griet’s artistic sense that captures the painter, the sensitivity that turns their knowledge into attraction, the same attraction that the artist tries to confine to his art.

The women of his paintings … he pulls them into his world. You could miss it.

We, who know little or nothing about the master of Dutch painting, certainly do not know how it really went but his story continues to enchant us. It’s a story in which to get lost inside.

three nights with Girl with a Pearl Earring